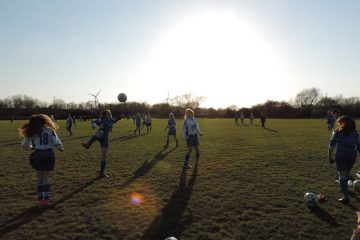 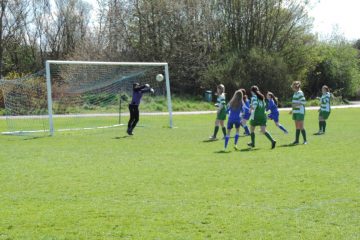 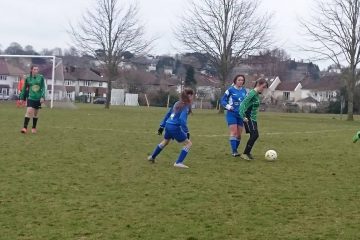 Bristol Ladies U15 are still without keeper Chloe, Mayca was out after twisting her knee in training and Emma was away, so the team was down to the bare bones (and Olivia was feeling ill).

Nonetheless, the girls played some really good football and attacked the St Nick’s defence from the start. Madison and Anna combined well down the wings, with some strong tackling from Anya to keep breaking up the St Nick’s attack: our defenders kept one of the top strikers in the league down to a couple of shots.

Hannah played a good one-two with Anya who then burst through the St Nick’s defence to score low into the bottom corner of the net.

The second half began: this half was (literally) all downhill as BLUFC were playing down the slope this half. The girls piled on the pressure and were awarded a penalty… only for Charity to miss!

Within minutes, St Nick’s attacked, crossed a ball into our box and some how it managed to end up in our net, levelling the match: game on!

Madison received the ball on the wing, dribbled past a couple of St Nick’s defenders and set up Hannah: only for her control to let her down.

Ellie was having a excellent game (not giving any ground) along with her co-defenders Chloe, Charity and Emily, and Sophie and Olivia played well… once they started playing.

The game looked like it was heading for a draw, only for Madison to collect the ball on the edge of the box and hit a shot right over the keeper’s head into the roof of the net, taking all three points. Great game.

Players of the match: Madison and Anya 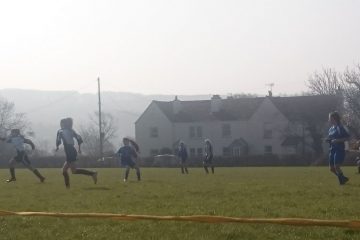 With a few girls under the weather, both keepers not available and on a very heavy pitch with the grass up to your ankles it was always going to be a testing game.

But the girls played some nice football considering, eventually overcoming the offside flag going up every time we attacked.

Mayca broke the deadlock with a solo run through Portishead defence to round the keeper to put it into a empty net, there weren’t many chances but trying to run with the football was impossible and even a big boot up the field was hard to do as players was losing their footing.

Ellie came on at the start of the second half despite not feeling too good (dreaded lurgy… she’s off school too now — ed.): she’d been taking photos while sat on the floor in the first half, hence we’ve got photos this week.

Olivia picked the ball up on the wing and went into the opponent’s box, was just going to shoot but was taken out: enough for the ref to award a penalty – and Charity blasted it home.

Portishead got into the game but never had a shot on target which was good for Madison who was deputising in goal.

Some good work between Anja and Sophie allowed Hannah to collect the ball and fire the ball into the roof of the net from the edge of the box.

Ellie had played really well (despite the lurgy) but only lasted 20 mins in the end, but really good of her to try, and her being on the pitch made a difference as it allowed other players to push up the pitch more and it was during that period that two of the goals were scored.

Charity, Chloe, Emily and Sophie all had a very good game in defence and Anja, Anna and Caitlin really ran the midfield. Mayca and Hannah always looked dangerous on the break; Abigail came on each half and played her part.

Players of Match: Charity and Chloe

Match report by Coach Steve, edited and uploaded by the Web Monkey. 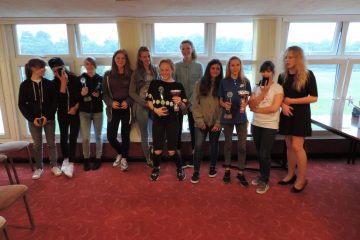 Having not played for the whole of February (matches being rained off plus being the odd team out last week so no match), the girls put up a great performance against a strong Forest Green Rovers side – with three of our girls ill the rest of team did really well.

From the start we were on the attack with Hannah going very close.

Within 5 minutes Forest Green broke away to score a opportunist goal.

Back on the attack playing some lovely football we open our scoring with two well taken goals through Mayca. With Madison, Sophie, and Olivia Burton being a constant threat down the wings, goals were bound to come.

Good work at the start of the second half between Anya and Chloe to set up Mayca to complete her hatrick.

Forest Green broke away again to score a lucky deflected goal which flew over Ruby’s head into the net, but the girls soon hit back through Caitlin who scored two excellent goals, with Forest Green strugging with their goalkeeper having gone off injured after a collision with one of our strikers (mentioning no names, but apparently her head hurt more than your knee in the long run!).

Both our keepers Chloe and Ruby, along with our very good defence (Ellie and Charity and new signing Emily) kept the opponents attackers at bay. Just to finish it off Madison hit one from the edge of the box into the roof of the net.

Final score 6 – 2 to Bristol Ladies Union
Players of the match Charity , Mayca, and the very hard working Anya, all had outstanding performances along with the rest of the team. 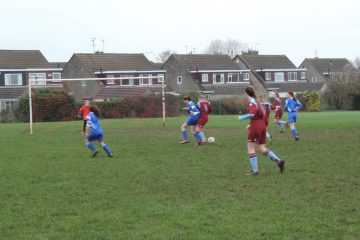 All of the BLUFC home fixtures were cancelled today due to effects of the weather on the pitches, as were many away fixtures. Nonetheless, U15 luckily got a game, even if it was wet, windy and squelchy.

The match started slowly but BLUFC were soon pushing up the pitch and dominating possession.

BLUFC opened the scoring with a beautiful bit of passing teamwork, scything through the Mangoes’ defence: Anna cutting in around the back, to Mayca who did a one-two with Caitlyn before tucking the ball away.

After that exemplary bit of Barcelona-esque football, the hordes of watching fans were in high spirits, but there then followed half an hour of frustration. Plenty of opportunities and shots on target (and slightly off the target, peppering the air around the posts and coming off the crossbar once) but perhaps BLUFC were admiring the Mangoes’ dayglo-orange goalkeeper’s kit, as almost everything between the posts seemed to be aimed straight at the goalie who, to her credit, didn’t do much wrong, and did pull off some more challenging saves and pushes-wide too.

Emma, Charity, Chloe and Ellie across the back in defence had a very variable game: some howlers, especially on the wings, but by and large every oopsie was more than atoned for. Chloe got left standing a few times, but soon clawed the ball back. Ellie seemed to have her boots on the wrong feet because, despite trying to blame the wind, some of her long balls up the pitch were alternately slicing or hooking and generally heading wherever they felt like (some were pretty good too, though).

The Mango counter-attacks that got through the defence were well covered by Ruby or Chloe in goal, with Ruby coming out well and Chloe doing her usual suicidal dives at players’ feet to smother the ball.

Finally, with the prospect of Mexican waves in the crowd looming, Hannah got bored with the game of catch with the goalkeeper and curled a shot in.

Mayca showed some impressive skill by managing to re-do her hair yet still making a tackle and winning the ball, taking the ball down the pitch with her hands still busy styling her barnet.

Another great bit of football soon followed, with Mayca, Cait, Anya and Anna combining to thread the ball through the defence, with Cait taking the final honours on that move.

Emily, recently arrived during the January transfer window from Keynsham, did a great sliding tackle, the likes of which have been the bane of BLUFC’s attack in the past. Good to see some proper sliding tackles in the royal blue of Bristol Ladies at last (that wasn’t Emily’s last of the match either).

At the other end of the pitch, Anya hammered in a screamer of a shot in from edge of box (“full of sound and fury” to blatantly steal the Shakespearian reference from the Bristol Free School boys’ football write-up this week) that the goalkeeper had no chance against.

There was a great bit of “playing the advantage” from the referee as well (could’ve awarded the foul, but let play continue), not sure we’ve ever seen that before at this level.

Half time and the match stood at 4-nil.

The second half felt colder and even more wind-swept, either that or the cold had seeped through the various pairs of thermal socks etc. that the myriad of supporters crowded along the pitch were wearing.

Olivia and Sophie were on the pitch together up the right hand side and, during occasional breaks in their conversation, burst forward up that wing and combined together well. Madison, as ever, showed some great skill on the ball and controlled the midfield well (often being the only bridging player between our back-four “deee-fence” and the rest of the team forming the “offff-ence”, seeing as the team seemed to be taking the American Football approach of two specialist teams playing separately!).

Mayca took a great shot from the edge of the box, bending the ball in (like she’s been threatening to for the past two matches).

Anya decided to go for the award for most injuries in the match, collecting a pair of nasty stud-gouges down her thigh (ouch: someone needs to change their studs!) and then a full-force ball from Emma in the face. Didn’t stop her though.

Olivia showed her skill again with an incisive cross across the box: Anna latched onto it with a perfect volley, taking the score to six nil. Olivia and Sophie further showed off their footwork skills with an ongoing game of “kick divots of mud at each other and anyone else in range” which kept some of the younger fans entertained for a while.

Volleys from Olivia’s in-balls were apparently in-fashion, as Madison then did a great one from an Olivia corner which only just skipped wide, to a collective “ooooooohhhh!” from the coach-loads of travelling fans.

Mayca and Hannah exploded up the field on the break, taking the ball up the pitch together: Mayca found herself one-on-one against the keeper, took it around her to beat her and tapped the ball in for her hat-trick and the team’s seventh.

Bristol Ladies pushed right up the pitch towards the end of the match (maybe it was something that goalkeeper Chloe said?) – see attached photos.

Comedy moment of the match went to Ellie (against stiff competition of the crossbar challenges, mud-kicking and stopping-ball-with-face antics). She’d been pushing up through the second half and taking most of the throw-ins on the right-hand side of the pitch, so in the dying minutes of the game, with the ball out of play, she ran up to take the throw. Sophie, who’d picked the ball up to throw it, misunderstood Ellie’s weaving jog through the Mango players and took the throw in, throwing it to the option that Ellie had presented. Either as a result of the shock of this, or possibly (as Steve suggested) a particularly active worm rearing up to trip her, or it was that sniper hid in the bushes, Ellie suddenly went down like a sack of potatoes for no adequately explained reason, much to everyone’s amusement.

Full-time score: 0-7 to the visiting Bristol Ladies. Very enjoyable match for all involved, despite the weather, and the amount of football pitch carried home in the backs of everyone’s cars.

Players of the Match: Anja & Mayca

PS: I may have been slightly exaggerating about the number of travelling fans at the match 😉 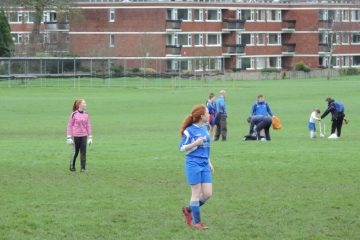 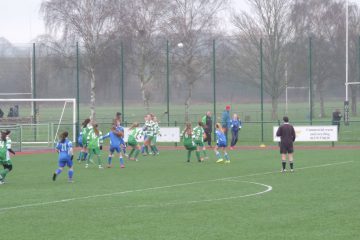 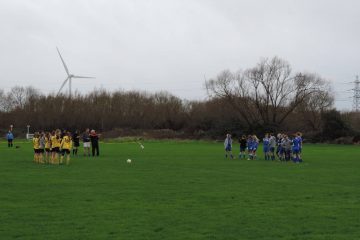