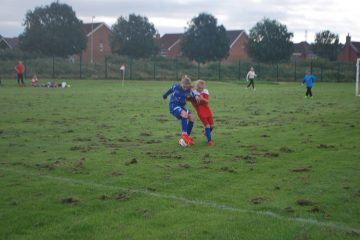 BLU continued their 100% start to the season with a home win against Whitchurch.

The first half was end to end. Whitchurch hit the post from an early penalty, with Evie-Jean and Jas both fizzing shots past the post at the other end.

At half time, BLU knew that they had work to do and they began the second half well by applying some early pressure.

They continued to press and finally got their reward.

Anna intercepted a pass in midfield before laying it off to Freya – she slid a pass through to Evie-Jean, who finished emphatically past the goalkeeper.

Following the goal, both sides experienced spells of possession but neither could breach each others’ resolute defences. 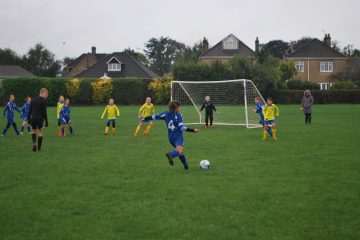 BLU began their second game of the season with three points in the bag – and they were hungry for more.

Despite numerous efforts on goal from Anna and Freya, BLU went into the break 1-0 down. A dipping strike from Bath’s number twelve looped over Gemma in goal.

An inspired switch saw Gemma start the second half upfront, bagging her first goal of the season within minutes. A smart turn-and-finish following a series of blocks from the Bath defenders.

Gemma’s goal seemed to kick the team into life. Evie-Jean began a bursting run from midfield and composed herself before slotting past the goalkeeper.

Gemma followed up on her first goal of the game to bag a brace with a strike similar to Evie-Jean’s. A change of pace took her past Bath’s defensive line, before she found the net with a calm finish.

BLU managed to see the game out to add another three points to their tally.

POTM: Gemma (bagged a brace to open her account for the season).