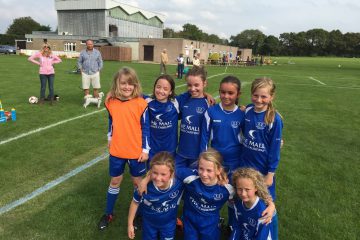 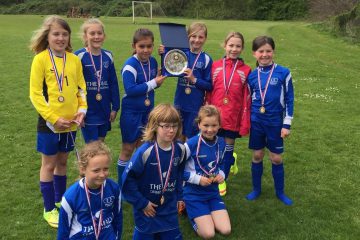 The girls were fantastic despite missing a few regulars. We started off very slowly and were very much the weaker team for the first ten minutes. Probably the poorest we have played all season but we soon got going and started to take control. With 9 players and subs every five minutes we were able to get instructions out and shake them up a bit and let them know how important the game was.
I’m glad to say they took this on board and started to play how we know they can. We started to create chances and Martha hammered in a goal after persistent work to beat two players.1-0 at half time.
Keep up the same levels of commitment and battling was the chat at half time.
The girls continued the pressure and had a few chances but Portishead came back into the game and with some of their players being a foot taller they started putting pressure on us. We defended valiantly but they managed to equalise with ten minutes left. Both sides pushed for the winner but it went to penalties.
Both sides scored the first two and then each side missed to take it to sudden death. When on the seventh player for each team we scored and Portishead missed. A delayed celebration as it sunk in and then the girls were in a massive group jumping on each other and enjoying the win they had worked all season to get.
Some girls had some down moments during the whole game as they thought their mistake may have cost the game but the togetherness and support they all showed each other made me very proud. We all want to do well but it is how you react when a teammate makes a mistake that shows real character. The girls were fantastic and deserved their day!!
Well done to in no particular order, Tilly, Amelia, Charlotte, Martha, Lydia, Ava, Ruby E, Fern and Jess. We missed Eve and Ruby Saunders who have both been very much part of the squad but were not available on the day.
Thanks to the other coaches Chris, Neil and Ade who have worked all season to get us to this point.
Of course the parents were fantastic on the day and throughout the season.
By Paul Maggs, 8 yearsApril 21, 2015 ago