BLU returned to action with an emphatic victory away at Swiss Valley.

Swiss Valley began the game well and managed to create a couple of chances, neither of which troubled Ella in goal.

Once BLU had eased into the game, they quickly forced saves from the Swiss Valley goalkeeper – Evie-Jean and Jas both saw shots stopped.

Jas opened the storing shortly before half time; tapping in a ricocheted shot that fell to her from Jess’ looping corner. 1-0.

BLU continued to push and doubled their advantage before the break. This time Tia found the bottom corner with her right-footed curler. 2-0.

The away side were much brighter in the second half and quickly rattled the woodwork from Jas’ arrowed hit.

Evie-Jean increased their lead with a perfect shot from the edge of the box. 3-0.

Tia and Mace stretched the lead to 5-0 at the end of the game. Tia controlled and finished a cross from Anna on the right for 4, and Mace completed a team move with a tap-in on the goal line for 5-0. 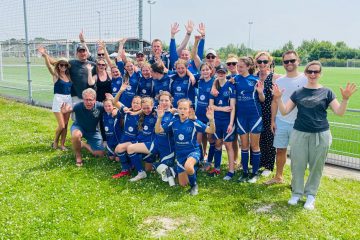 The U13s travelled to Holland on a mini tour to take part in a 11v11 tournament in Rotterdam. The standard was unknown so it was exciting to see how the U13s would perform against Dutch Read more…

After many weeks of not having a game. We have finally managed to organise one. It was great to see the girls up for their first 9 aside game with OFFSIDES! After waiting 40 minutes Read more…

A surprising early goal from Longwell Green started the match but Jess and Iris were straight on the attack with some good shots at goal. Great defending by Lily, Emily and Pippa, with great passing Read more…